Rockets, no-smoking carriages, and cinnamon rolls: from late August to mid-September, the crew of the newest film adaptation of the children’s classic The Flying Classroom was busy in the Vinschgau area in South Tyrol/Südtirol. A visit to the film set on the last day of shooting in Glurns/Glorenza.

The film crew from UFA Fiction has set up shop in the parking lot behind the Tauferer Tor city gate leading into the historic town centre of Glurns. The September sun is still burning down, crew vehicles are parked next to catering tents, and in the midst of it all there are children sitting on beer benches, playing cards and waiting for their next scene on the set. A German tourist, who has been watching in silence for a while, asks what they are shooting. His eyes light up when he hears the title “The Flying Classroom” – what a coincidence to encounter one of his childhood classics while on a holiday, of all things!

In 2022, The Flying Classroom (based on the novel by Erich Kästner) will be remade by UFA Fiction co-produced by LEONINE Studios. “The story is universal and timeless”, says Executive Producer Matthias Adler (Altes Land, 2019; Ich war noch niemals in New York, 2018), who is looking forward to reimagining the story in the present in this, its fourth film adaptation. Almost 20 years after the last adaptation, Carolina Hellsgård (an alumna of the IDM Script Lab RACCONTI #8 – Wanja, 2015; Sunburned, 2019) tells this school story in a modern voice and from a contemporary perspective; the screenplay is written by Gerrit Hermans. In the story, thirteen-year-old Martina (Leni Deschner) from Berlin is offered a scholarship for the Johann-Sigismund-Gymnasium, a secondary school in the quaint Alpine town of Kirchberg. Once there, Martina and her new friends find themselves at the centre of a long-standing conflict between the boarders (the city kids boarding at the school) and the day students (the students from the area). A joint theatre production is supposed to settle that dispute.

“It’s amazing, the sites this small country has to offer.”

The cast is rounded off by the adult roles: Justus Bökh (Tom Schilling), headmaster of the boarding school; Principal Kreuzkamm (Hannah Herzsprung), and the mysterious “No-Smoking” (Trystan Pütter).

Matthias Adler takes us to the “no-smoking railway carriage” on a small orchard meadow close to the base camp directly by the Etsch river. With the obliging help of local farmers, that meadow has been converted into an allotment garden, complete with an herb bed. “This is a world of its own, one of my favourite locations”, raves Junior Producer Georgina Fugger, her voice almost wistful. The thing is: the set is being dismantled. All that is left is the railway carriage where “No-Smoking” lives. In the film, it is a refuge for the children and one of the main locations for the film shoot in Glurns. When an actual train was required near the end of the shoot, half of the carriage was painted red without further ado – later, CGI will make the landscape pass by the windows as Martina travels from Berlin to Kirchberg and the boarding school in the Alps. Production Designer Thomas Franz keeps a close eye on the dismantling procedure – after all, some of the props have already been promised to locals, who will come to pick them up after shooting has wrapped. During those two weeks, the film shooting has become part of everyday life in the small town. 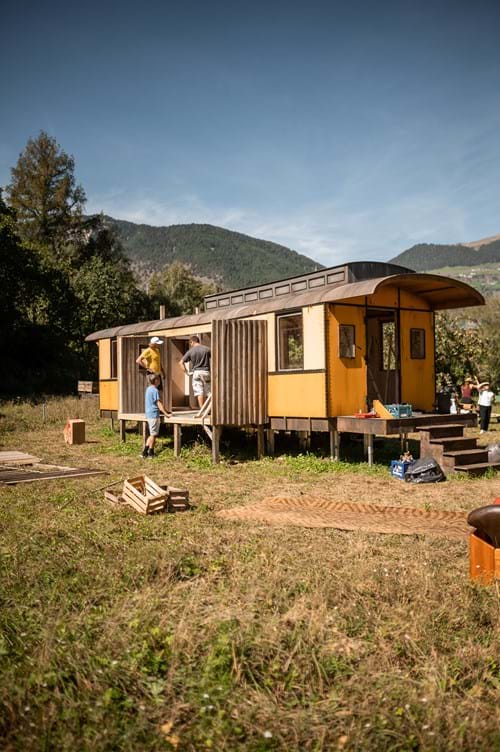 In the Thick of Things

One of the film’s key scenes is currently being shot in the midday sun in the square outside the Grüner Baum inn in the historic town centre: one of the opening scenes of the film. As is usual these days, about 60–80 people are involved on set, with local film professionals present in almost every department: wardrobe, make-up, even production.

Wide shot, the marketplace is cordoned off over a wide area, traffic is at a standstill. When Martina arrives in Kirchberg, the most important rule of school life is explained to her by tough Jo (Lovena Börschmann Ziegler), boxer Matze (Morten Völlger), and little Uli (Wanja Valentin Kube): the separation of boarders and day students. In the same scene, Principal Kreuzkamm crosses the square together with her daughter Ruda (Franka Roche), leader of the day students. Ruda does not deign to look at the boarders.

While the Grüner Baum inn remains open throughout, the tables outside the building are reserved for the cast and crew for the duration of the shoot. Once the scene has been wrapped, holidaymakers tentatively start edging out of the building. Some look surprised, others have been here for a while already and have gotten used to making sure not to walk into a shot anywhere. Others still return to the hotel from a day trip and offer friendly greetings to familiar faces in the film crew.

The set is entirely in the hands of the children. The young actors and actresses know exactly where to go, and when. Between takes, they chat. The main cast includes eight children; the approx. 20 children for the classroom scenes are recast at each location using new extras. 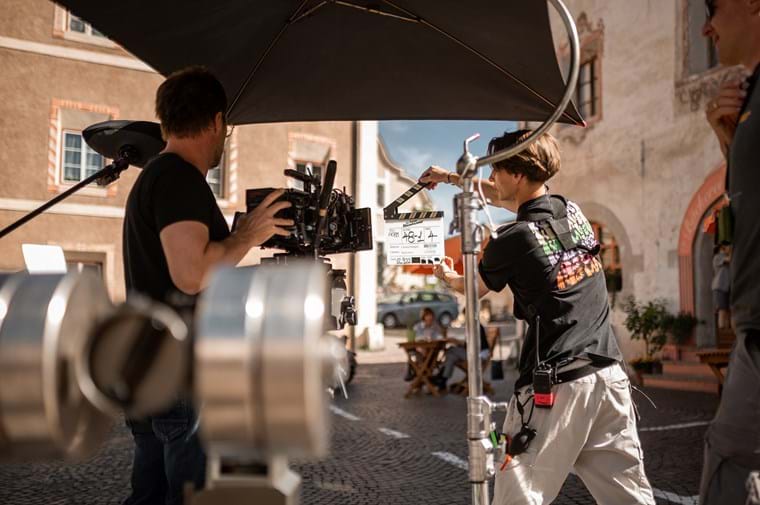 After the lunch break, the crew returns to the marketplace. Routine has settled over the Grüner Baum inn, every table occupied, while the shooting continues just a little ways away. The delicatessen shop transforms into the bakery where Matze buys his beloved cinnamon rolls. As only the façade of the building is shown in the shot, traffic now continues to roll as usual.

A stunt scene was shot by the historic town wall, and each of the three major city gates of Glurns was featured. A well-hidden little passage with a wooden door close to the railway carriage is hastily draped with ivy, transforming it into an “enchanted gate” for the rocket, which plays an important role in the children’s theatre play.

It is clear that the crew has fallen in love with this small town, and several locations were also found around Glurns. Matthias Adler is happy to take stock on this, the last day of shooting: “If I had to say what I liked, I wouldn’t know where to start. We were out and about in Glurns a lot, in the alleys, by the town wall, but we also went to Churburg castle to shoot. There are so many locations to be found around here, all in the direct vicinity – unfortunately, you have to pick and choose.”

“Sure, knowing the area and meeting helpful people is important – but sometimes you’ve got to rely on luck just a little bit!”

In the remake, Churburg castle becomes a boarding school – at least on the outside. Interior scenes such as classrooms and dorms were shot in Berlin in early September. The secondary school, portrayed by the Kloster Neustift monastery, is a building separate from the boarding school. “That decision was born from the wish to feature the paths the children use, so that they were able to explore the place in the story. The day school is located at the foot of the mountain, and the boarding school at the top”, recounts Matthias Adler. “Such a travelling production is particularly exciting for our young actors and actresses. It’s amazing, the sites this small country has to offer.” 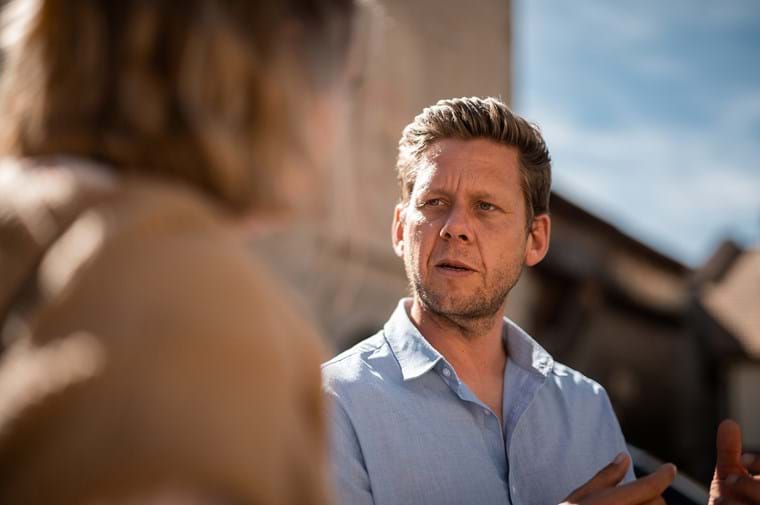 Hardly anyone knows those exact sites better than Location Manager Debora Scaperrotta, who found missing locations and looked for alternatives in order to make the project logistically possible within the scope of the shooting schedule. Only the lake, where a few key scenes take place, is not located in the Vinschgau area. “It wasn’t easy to find a lake with a pleasant temperature that’s appropriate for a film shoot involving children in mid-September. And once we had picked Dürrensee lake, all of the sudden the water level was at an all-time low. Sure, knowing the area and meeting helpful people is important – but sometimes you’ve got to rely on luck just a little bit! And we were certainly very lucky, because the water levels were back to normal right on time.”, says Debora Scaperrotta with a laugh. And so the next day, the whole crew will pack up and travel to the Hochpustertal valley.